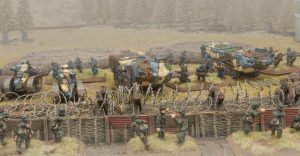 Like many people I grew up believing the ‘Lions led by Donkeys’ myth when it came to the first world war.
Whilst there is truth to the war, like all wars, being a horrific event in which millions were killed or maimed, from a military history standpoint it was far more nuanced than many of the post-World War Two generations believe.
A decade ago I completed a Batchelors Degree in military studies, during which time my eyes were opened to just how transformational the Great War was. Far from unimaginative, incompetents many of the military leaders were caught short by just how much human conflict had been altered by mass industrialisation. The conflict saw a complete transformation from the doctrine, tactics and equipment of the 18th century, to what we in the 21st century recognise.
The mass introduction of armoured vehicles, aircraft, rapid fire artillery and automatic small arms both caused the stalemate that resulted during the first couple of years of the war, and proved to be some of the solutions.

The last four years have marked the centenary of the First World War, and have sparked a fresh interest globally in the study of the war. YouTube has a number of great documentaries on the subject of the war.

Here are a couple of my favourite picks:

The Great War is a week by week retelling of the war, with supplementary episodes on specialist subjects. C&Rsenal is a channel that has very in-depth episodes on small arms development (a personal favourite subject of mine) leading up to and during the war. I would highly recommend both.

At Battlefront the Great War is a subject that has been touched on a few times, and now with the release of the latest (and most complete yet) version, there has never been a better time to ignite (or re-ignite) an interest in the subject. I’ve had a longstanding interest in the United States Army/Marine Corps, and I am intending to start a project where I build an army from every major epoch of the 20th century, starting with the first world war. It is a mammoth task, but like all hobbyists those are the tasks that are the most engaging. I hope the release of The Great War will whet all of your appetites for this oft misunderstood period of history (if it wasn’t already) as much as it has mine.