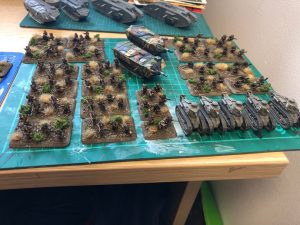 With Chris Potter, BF UK Office
It was with some trepidation that approached painting my first ever Great War army. But the plan as ever for me was a simple one: Break everything down into manageable units to prepare and paint, and then hope the kids stayed asleep late into the evenings. Oh and find something good on TV to keep the background ambience going. The choice this time around was Silent Witness on the BBC iPlayer. Not that this has anything to do with painting Great War Belgians!

I started by sorting out the pile of minis and working out a legal and viable army list. I’m not one for building lists to win games… The main aim for me is to have a coherent force that is a joy to play. Even if I get thrashed everytime that I bring them out to battle.

My first draft went a little something like this:

This is a cool 100pts exactly and ticks all the boxes for me – there is some infantry which is pretty key to Great War gaming, Machine Guns to attack the other guy’s infantry, as well as big guns in the form of the 1897 Field Artillery and also some Tank Support. I really love the FT-17, as it’s a small tank compared to other tanks, I’ve been painting for Team Yankee recently, but also packs a punch in game terms, able to tie down infantry as well as engaging more dug in units.

Whilst not having the landships of the other nations in my list, there is some room for moving units around. If I wanted to take some St Chamonds instead of the FT-17 I would also be able to add in another infantry platoon to hold objectives.

In terms of painting I figured it was best to split the force into 3 stages. The first was the tanks. I couldn’t wait to paint these tanks with their crazy camo patterns (by WW2 and Modern Standards) Not only did I paint the FT-17s but I also painted some St Chamonds at the same time, to increase tactical choice, but also to get the tanks done. Stage 2 was the Infantrie Platoons and Machine Guns, as they were the most time bound for the main part of the force. Stage 3 was to finish up the force with the trench mortars and the Artillery Battery. I like the force as it is. There is a degree of tactical flexibility if needed with the extra tanks and also I managed to paint up some extra guns if required.

Next step is a battle report between some of the other guys in the office to learn the new V4 rules.
~Chris